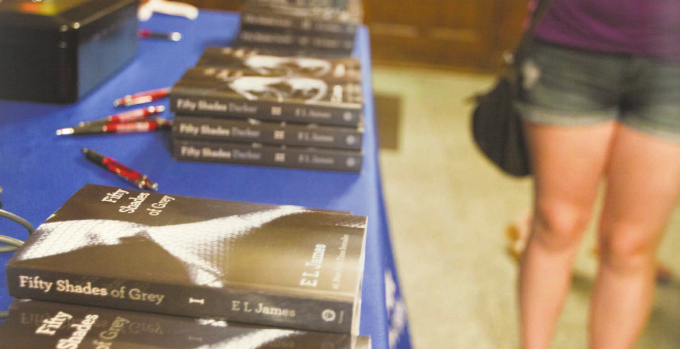 At the “What’s So Bad about ‘Fifty Shades of Grey’?” panel, part of Banned Book Week, three scholars discussed why the series has not been banned from the Ames Public Library as well as the series’ sexual topics and literary value.

Lynn Carey, interim director for Ames Public Library, said the reasoning behind the Ames Public Library’s decision to carry “Fifty Shades of Grey” could be summed up in 10 words: “One-hundred-twenty holds: Of course we will buy it.”

Carey said the Ames Public Library bases its purchases on a number of factors, including the public’s interest and the quality of the materials. She explained the library initially chose not to carry the series because of the bad reviews the series had received.

However, that decision has since been reversed.

“Within a couple of weeks after [‘Fifty Shades of Grey’] was published, we were taking several requests,” Carey said. “So, we bought it because people wanted to read it.”

For the library to ban a book, someone must first challenge the book.

A challenge is made once a complaint reaches the library’s board of directors, after being discussed with the purchaser of the book and the library’s director.

Carey said there have been zero complaints regarding the library carrying the “Fifty Shades” trilogy. However, she said she has heard many comments about its literary value.

Brenda Lohman, professor of human development and family studies, said she was on the panel as the “sexpert.” She explained how the “Fifty Shades” trilogy is viewed differently by people because every person has his or her own comfortability level when it comes to talking about sexuality.

Lohman also discussed how the series is different for those who did not read the entire series.

“My first comment to you is, if you haven’t read it and you want to read it, read the whole series because you’ll get a very different story and understanding of the relationship if you start from book one and only get halfway through it because you’re appalled or don’t like it or it’s not for you,” Lohman said.

Dometa Brothers, professor of English, discussed the literary value of the “Fifty Shades” trilogy. She said the series is “extremely poorly written” and the flaws of the books are “too long to enumerate.”

Brothers described the books’ sex scenes, which are what many readers talk about, as numerous and banal. She also said the books should remain on the shelves, but they should not continue to garner the attention they have received.

“My most fervent hope is that you find truly masterfully written works of art that have been banned and read them,” Brothers said. “Better yet, go forth and find quality literature that deserves to be read, and do.”